The Association for the Recognition of Excellence in SF & F Translation is seeking a number of volunteer staff to assist with the running of the Science Fiction and Fantasy Translation Awards. The positions are detailed below. Please email info [at] sfftawards [dot] org with details of your experience if you are interested in any of these posts.

This person will work with the awards jury to facilitate efficient discussion of eligible works. Duties will include assisting with the recruitment of jurors, obtaining copies of eligible works for the jury, facilitating jury discussions, liaising between the Board of ARESFFT and the jury, and retaining institutional memory from year to year. An experienced Facilitator is preferred, but training can be provided to the right candidate.

This person will be responsible for working with the Board to raise the funds necessary for ARESFFT to continue operation, in particular the cash prizes for award winners. Duties will include obtaining donations of give-aways from publishers and authors, and running online fund-raising events.

This person will be responsible for keeping an eye out for translation-related news and posting articles to the Translation Awards website. Knowledge of WordPress is preferred.

With the year being more than half over, we need to be collecting lists of 2011-published works that are eligible for our next set of awards. If you know of a work that is eligible, please post a comment on our Nominations page. We’ll be getting in touch with the usual suspects — Haikasoru, Kurodahan, Black Coat and so on — to get their 2011 publication lists, but we need help spotting translated books published through other venues.

Clarkesworld, the Hugo Award winning online magazine, has published a story translated from Chinese. The story is “The Fish of Lijiang”. It was originally written by Chen Qiufan, and was translated to English by Ken Liu.

We asked Ken Liu about the original form of the story. He tells us that it is written in something known as “Modern Standard Chinese”. This is writable by speakers of both Mandarin and Cantonese dialects. In future if we refer to a work being written in “Chinese” it is this language we will be referring to.

Haikasoru reports the sad death of the leading Japanese science fiction writer, Sakyō Komatsu. He was best known for his earthquake disaster novel, Japan Sinks, which sold over 4 million copies. There is a brief obituary in The Independent. The Science Fiction Encyclopedia entry for Komatsu can be found here.

Well, we made it through one year. The winners have been decided, and the prizes presented. Certificates are going out to the honorable mentions. And one happy winner has got back to us. Here is a photograph of the award for Long form sent to us by Georges-Olivier Châteaureynaud. 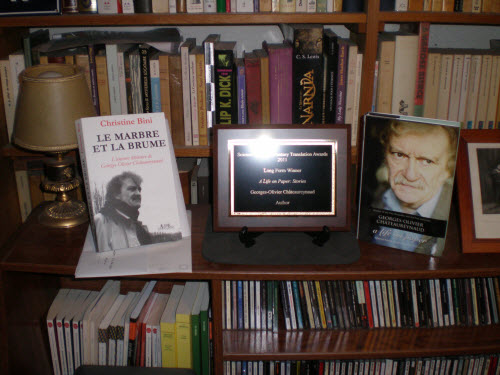 Before moving on we should once again thank all of the people who made this year possible. So very warm thanks once again to the authors, editors and publishers who donated books:

To the organizations who have sponsored us:

To our volunteer jurors: Terry Harpold, Abhijit Gupta and and Dale Knickerbocker.

And to everyone who donated money in our fund raiser.

Now we need to get on with next year. More on that soon.

The results of the 2011 Awards have been presented at the 2011 Eurocon in Stockholm. Guests of Honor, Ian McDonald and Elizabeth Bear opened the envelopes. In each category the jury has selected an houorable mention as well as a winner. The results are:

In addition to the standard awards, the Board of ARESFFT presented a special award to British author and translator Brian Stableford in recognition of the excellence of his translation work.

Mr. Gauvin and M. Châteaureynaud were unable to be in Stockholm, but both sent words of thanks:

Edward Gauvin: “My deepest thanks to all the readers and editors who believed in these stories along the way, especially the folks at Small Beer. To Susan Harris and Paul and Sylviane Underwood. To Georges-Olivier, for writing them, and for his encouragement and support. And to the Science Fiction and Fantasy Translation Awards, who have honored us with this inaugural edition of a prize with a terrific future ahead of it.”

Georges-Olivier Châteaureynaud: “Many thanks to my mother, to Small Beer Press, and to the Science Fiction & Fantasy Translation Awards. Sometimes, it is as much in an insightful review as in a translation — in this case, in a language I’ve a few glimmers of, having studied English at the Sorbonne — that one has the feeling of having been understood. I feel I’ve found a kindred spirit in Edward Gauvin, miraculously capable of comprehending and conveying what I’ve tried to express in these tales.”

Hannu Rajaniemi was present to accept the award. We will get some words from him soon, but he’s being interviewed by Charles Stross on stage right now.

The jury have sent some comments about the chosen works.

The stories in this collection — the first-ever English translations of Châteaureynaud’s work — are written with such delicacy and economy of prose that the reader may be unprepared for the marvelous — and often disquieting — irruptions of unreality that break into experiences of the narrators and characters. This is unapologetically fantastic fiction, but so subtly-crafted that even outrageous violations of reason — a man sprouts tiny wings, a siren swims ashore, a guillotined head complains of its decomposition, a mummy in a double-bass case sings beautifully in Breton — seem manifestly verisimilar; it all just fits together with cunning perfection. Edward Gauvin’s translations are models of the discipline, masterfully attuned to Châteaureynaud’s stylstic shifts, scrupulous ambiguity, and dark humor.

A brilliant, ambitious work of utopian fiction and an extraordinary shaggy dog story, complexly and confidently told. The peculiar architecture of the unnamed island, the islanders’s strange language-games and mutable writing system, knowing manipulations of would-be colonizers, and the method of the island’s sole, parodically hypertextual, historical novel — called simply the Book — are realized on so many registrers and with such care that Ajvaz’s novel seems as much a shorthand encyclopedia of modern thought on language, mind, and fiction-making, as an entertaining, Swiftian travelogue. Andrew Oakland’s translation deftly crosses all of these fictional and nonfictional orders without a misstep, capturing the novelist’s wry humor and philosophical rigor.

A brilliant crossing of multiple sf and fantasy genres, marked by canny humor, melancholy, and a looming sense of menace, and shot through with beautiful and memorable images and exchanges. Rajaniemi’s evocative prose hints at a richly-conceived backstory of a technological apotheosis that has refashioned real and virtual worlds — many of the details of which are only hinted at but never seem underimagined. A rare work of short fiction that grows more complex on successive readings.

An intensely-told, unsettling parable of the family in an age of hyperreality and affective alienation. Rantalaiho’s precise translation of Niemelä’s spare, detached prose admirably captures the narrator’s anxiety and imperfect understanding of the bonds that join her to the daughters — and kinds of motherhood — between which she must choose.

Brian Stablefords contributions to science fiction and fantasy in the roles of author, editor, and historian-scholar may well be unequalled; certainly, no other living writer has matched the variety and scope of his prodigious output of original fiction and scholarship. For the last decade, Stableford has devoted much of his considerable talents and energy to an unprecedented project of literary resurrection, translating more than sixty books of proto and classic sf, horror, and fantasy by French authors of the late 19th and early 20th centuries. Most of the authors and titles are unknown to English-speaking readers; only a handful had been previously translated; many of these texts are now almost impossible to find in the original French. Yet they include among them more than a few of the most historically significant and influential works of modern imaginative fiction in that language. They are invaluable to our understanding of the sources and development of world science fiction and fantasy.

Despite their sheer, daunting number fully seventeen of the texts nominated for this years long form Award were translated by Stableford his translations are complete and faithful. His critical introductions and annotations are models of discernment, and invaluable to the scholar and enthusiast alike. The intellectual sweep and literary success of this translation project are, in a word, astonishing; there is nothing comparable to it in the history of sf and fantasy translation, and it stands as a benchmark for the labor that these Awards aim to honor. Thus it is appropriate that with this Special Award in recognition of the excellence of his translation work, we congratulate and celebrate Brian Stableford’s ongoing service in support of world science fiction and fantasy.

We are delighted to be able to announce the finalists for our first set of awards. They are as follows:

The winning works will be announced at the 2011 Eurocon in Stockholm on the weekend of June 17-19. Each winning author and translator will receive a cash prize of US$350. ARESFFT Board member, Cheryl Morgan, will be present to make the announcement.

In addition to the standard awards, the Board of ARESFFT will present a special award to British author and translator, Brian Stableford. No less than seventeen of the nominees in Long Form from 2010 were translated by Stableford. The ARESFFT Special Award for Services to Translation will therefore be presented to Stableford in recognition of the excellence of his translation work.

Jeff and Ann VanderMeer have recently returned from a visit to Finland, and they have posted several reports from the trip. Many of these talk about the writers and editors that they met while they were there. Here are some interesting links.

While some of the Finnish writers, such as Hannu Rajaniemi and Leena Likitalo, can write directly in English, many of these fine writers rely heavily on translators to bring their work to the English-speaking world. Jeff and Ann have given us a good idea of the wealth of talent that exists in Finland. The next step is to make those writers available to a wider world.

Firstly Harmony, written by Project Itoh and translated by Alexander O. Smith, has been awarded a Special Citation (effectively second place) in this year’s Philip K. Dick Award. The PKD is awarded to the best paperback SF&F novel published in the USA in the year of eligibility. This year’s winner was The Strange Affair of Spring-Heeled Jack by Mark Hodder (Pyr). The winners were announced at Norwescon in Seattle. Further details, including video of the award ceremony, are available here.

In addition Haikasoru editor, Nick Mamatas, has been nominated in the Best Editor, Long Form category of the prestigious Hugo Awards. A full list of nominees is available here.

French comic creator, Jean Giraud (Moebius), is one of this year’s inductees to the Science Fiction Hall of Fame. Giraud shot to fame in the 1970s via the magazine, Métal Hurlant, which appeared in English translation as Heavy Metal. Two of his most famous creations are The Airtight Garage and Arzach. According to Locus, Giraud will be inducted at a ceremony in Seattle in June alongside Harlan Ellison, Vincent Di Fate and Gardner Dozois.

Does anyone know who was responsible for translating Métal Hurlant?